This story is translated and adapted from the collection Nangin Tanemprar: Cerita Rakyat Dari Indonesia published by the Summer Institute of Linguistics. Tanimbarese friends told me that they regarded this not as a story or a folk-tale, but instead as an incident from Tanimbarese history. 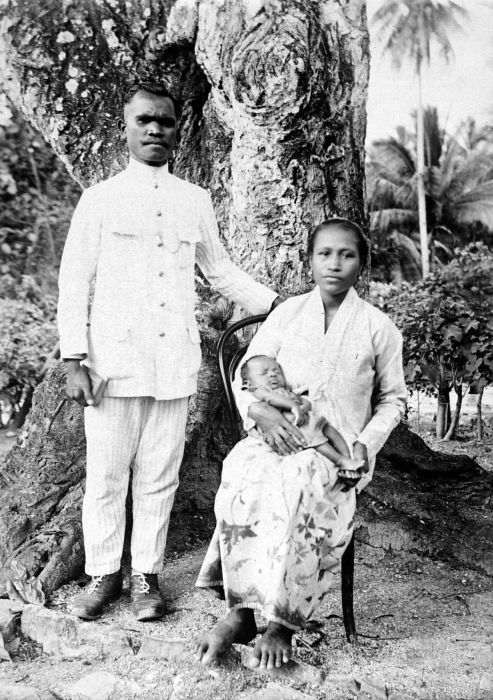 Once there lived a husband and a wife. They had been married for four years, but had not yet borne a child. As a result, they lived in discontent. One day they went out to the plantation to work. The husband told his wife that he needed to go into the forest to cut a new ridge-pole for the house. He slipped out of sight between the trees, leaving his wife alone.

When he had gone, his wife went to relieve herself, finding a secluded spot in which to squat. From her excrement she made a small ball, and out of this she began to fashion a baby, moulding it carefully so it could become human. Indeed, when she had finished her work, she saw that it was a truly beautiful child, and so she took it up in her arms and awaited the return of her husband, dandling her offspring on her knee. The child gurgled with pleasure in the sunshine.

When her husband returned, he was astonished. ‘Where did you get that baby from?’ he demanded.

‘I bought it,’ his wife answered quickly. Her reply seemed to satisfy the curiosity of her husband, who lifted the new child onto his back. The three of them returned home to the village.

When the child was two months old, its parents went once more into the plantation to cut grass. As the baby was still very young, and would only be an encumbrance in their work, the mother left it in the care of an old lady of the village. She gave the old woman very clear instructions. ‘My husband and I are going into the plantation to cut grass,’ she said, ‘and will be back later in the day. We are giving you our child to look after. But you must remember one thing: if the child cries, whatever you do, do not bathe him.’ So saying, they went into the forest.

No sooner had they left than the child began to bawl, and try as she might, the old woman could not stop its wailing. ‘There can be no harm,’ she eventually decided, ‘in giving him just a little wash, so that he will be able to sleep all the better. Then I will be able to put him to bed clean and happy.’

The old woman went to prepare a basin of water to wash to baby. She took the child up into her arms, and began to pour the water over his head. As soon as the first drop touched the baby’s skin, however, the little child turned back into a pile of human excrement again. The smell was revolting.

The old woman dropped the recently dissolved baby and ran from the house, laughing and spitting, muttering to herself, ‘This child must have come from shit!’ When the other women of the village heard all of this commotion, they too came out of their houses, and gathered around to see what all the fuss was about. The old lady told the other women what had happened and they all laughed uproariously, until they almost split their sides.

You can download the original in PDF format from the Summer Institute of Linguistics here: